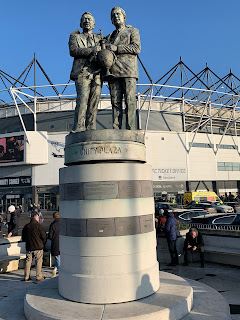 It's Tuesday morning. I'm sitting in my armchair ploughing my way through a huge bowl of porridge, whilst plotting my movements for the week ahead. There's a huge commotion coming from Ms Moon's office upstairs. I hear a "oh God" and a "oh nooo" followed by a huge shriek. I lift the bowl of porridge from off my lap and place it on a small table. I dash up the stairs to find the good lady in a flood of tears. What could have happened? "Has Cain Dingle met a grisly ending on 'C' Wing at HMP Armley?" (near to the Emmerdale Farm studios in Leeds). "No babe, it's much worse than that, Ken Bruce is leaving Radio 2 and taking his PopMaster music quiz game with him.
"Bloody hell, I thought it was something more important like life and death or an announcement of Series 3 of 'Early Doors.' Let's face it, the Ken Bruce Show is pretty pants apart from the quiz. It looks like the BBC haven't renewed the grumpy Scotsman's huge contract (he'll be on £500k plus) which expires in March. We can still fall out over PopMaster as the princess will be tuning in to his new home at Greatest Hits Radio, where one of Sticky's old favourites, Simon Mayo, spins some 7s. 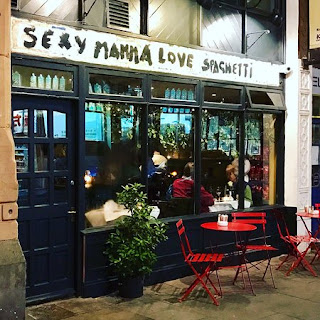 I open my diary, and flick through the pages to this week. It's an action packed schedule. Monday evening was spent in the hipster area of Hockley, in Nottingham city centre. Teatime is whiled away at Sexy Mamma Love Spaghetti, on Heathcote St. It describes itself as serving authentic Italian food and is walk-ins only. I grab the last available table and plump for Bolognese in penne pasta and Ragu - I could have rustled up something better myself, and a damn sight cheaper too, than the £14 that was chalked up on the blackboard.
Pasta tea isn't the real reason I'm in town this evening. The star attraction is the film 'Till', which is produced by Whoopi Goldberg. It's a biographical drama about the activist Mamie Till-Bradley, who pursues justice for the lynching and murder of her son, Emmet, down in Mississippi in 1955. It's a powerful and emotional film. I toss and turn in bed on my return home, thinking about that poor kid and his family. 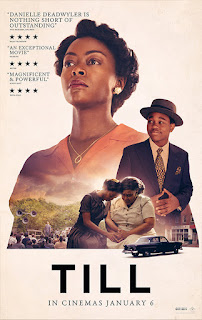 It's 9.44 a.m. on Wednesday morning. I'm on an EMR train that runs from Norwich to Liverpool. The first stop off is Sheffield. There's a short wait for a Northern train that's heading up to Leeds. I alight the train at Wombwell station. It's an old coal-mining town close to Barnsley. Wombwell Sports Association's ground catches my eye, as does the roped off, frost covered cricket wicket, and the brightly coloured football dugouts.
Three old guys are sitting in the groundsman's shed. I wander over and engage with one of them who later tells me he's from Portsmouth, but has settled in the area. He escorts me over to the football changing rooms and unlocks the front door. The purpose of my visit is to see the final resting place of 'Busby Babe' Mark Jones, who lost his life in the 'Munich Air Disaster' in 1958. Jones was only 24 years old and had already racked up over 100 appearances at centre-half for Manchester United. A memorial plaque is mounted on the wall. I walk up to the cemetery to pay my respects. A legendary Yorkshire and England Test cricketer, Roy Kilner, is also buried in the churchyard. It is said that over 100,000 attended his funeral in 1928 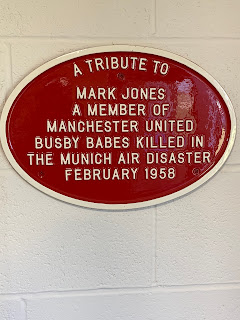 I call by the 'Butty Box' on the way back to the station. A couple of ladies, sat outside, are puffing on king-sized cigarettes. I enquire about a sandwich. "Just let me wash my hands love", says one of them. I'm invited back to the hut to have a brew with the lads. Two of them used to work at nearby Houghton Main Colliery, until it was closed by Margaret Thatcher in 1991. We chew the cud for over half an hour. They make my day with their friendly welcome. Their anecdotes of days gone by make me feel warm and fuzzy. One of the guys used to accompany Mark Jones's son, Gary, to Old Trafford every fortnight, until his passing three years ago.
I head back to Sheffield and have a bat around the place, clocking up almost 7 miles. I tick off CAMRA pub entries called The Wellington, The Harlequin and a Heritage Grade II listed watering hole called The Bath Hotel.  The latter is located close to some Turkish baths. I loved the curved leather seated bench in the cosy snug. 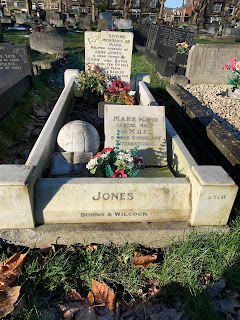 I hook up with my brother, who has travelled down from York. The lucky bugger has retired now. We down a quick real ale at the glorious Sheffield Tap before heading back to Nottingham on the 17.05. I take him on a whistle stop tour of some of Nottingham's finest hostelries. BeerHeadZ, Barley Twist, Keans Head and the Fox and Grapes all impress the judges. Add to that, supper taken at the award-winning Bohns Best Burgers, another trendy eatery.
He treats me to breakfast the following day at crowd favourite, YOLK. We walk it off with a 12 mile round hike to Beeston, and back, via the Trent and the canal; only stopping for a quick liquid refreshment at The Victoria Hotel, adjacent to the station. I'm propper fagged out on my return home as Ms Moon finishes her working shift. 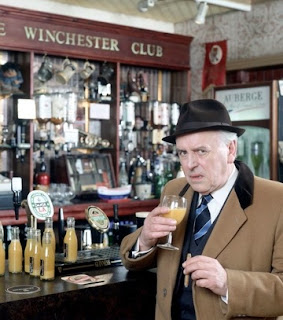 'Friday Club' legend Tony Mac is restored to the starting line-up. Ms Moon makes room after admitting to being transfixed to Series 9 of 'Below Deck' on All 4, which she's binge-watching this evening. Mac and I end up at a craft bar called Kraftwerks, it's in the hipster area of Sherwood. We work our way through the beer scoreboard before raiding the craft can fridge. Earlier. we'd visited The Winchester; Mac was less than impressed. I wasn't too chuffed either, Dave from 'Minder' wasn't behind the bar. We see the evening off back in town at Bunkers Hill, a firm favourite of Nottingham Panthers ice hockey fans. I thank Mac for tipping me the wink on a bundle package of a Sleaford Mods gig at Rock City, which includes their latest album release UK GRIM.
Decisions. Decisions. Decisions. I've awoken to a deep frost. The 3G gang, with their soulless cages, are making needless noise on social media. The beautiful game was made to be played on grass. I'm gutted when I hear that Grantham v Carlton has fallen by the wayside. I fold up my 'Still Hate Thatcher' T-Shirt and return it to the cupboard. Bloody hell, Lincoln City has now bitten the dust. Only one alternative remains, and it isn't going to go down too well with some of my mates. 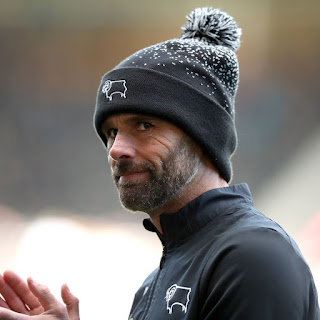 I step onto the escalator that drops me off at the second floor of the Victoria Centre. The 12.45 p.m. Red Arrow Trent Barton bus leaves the station ten minutes late. The driver turns a blind eye to payment. There's an inconvenient diversion that takes an age to circumnavigate. We're still in Derby for 1,30 p.m.
Nobody at the station is aware of a bus to Pride Park on matchday. The sky is blue, but the chill is bracing. I elect to walk on icy pavements littered with black ice. My footwear selection is an error. I pitch up at the ground by 2 p.m. I take a few photos and collect my tickets from a friendly member of staff. Derby are one of the few clubs that do 'print only' tickets. There's no download to your phone. 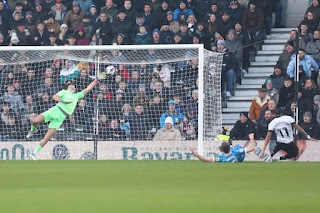 I've had chuff all to eat. A hot dog from one of the vendors will suffice. I'm seated up in the Gods of the West Stand on Row V. The players are warming up to the 1995 hit 'I Wish' by Chicago rapper Skee-Lo. Paul Warne's Rams are in a rich vein of form, and have lost only one in the last 13 League outings. Bolton are on a good run themselves.
It's my first visit here since an FA Cup 4th round tie back in 2008, when Paul Jewell's Rams were battered 4-1 by Alan Irvine's Preston North End. It was the same season that Derby broke a Premier League record for the least number of points. They only won one game. 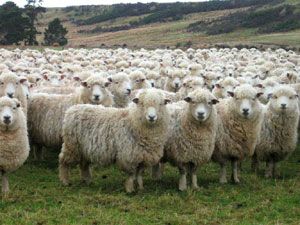 Due to a paper thin squad and the unavailability of highly-rated Mansfield-born defender Eiran Cashin, Warne has been forced to wheel out 37 year old Curtis Davies. He's beaten for pace in the opening minutes. Like most of Bolton's afternoon, the cross comes to nothing.
The bloke next to me is a pain in the arse. He harangues an excellent referee from minute one. Derby pour forward, a player is fouled in the middle of the park, before releasing the ball out to the wing. The cross is pinpoint and swept home superbly by Mendez-Laing. "brilliant refereeing" I say to our man.

Bolton are absolutely dire. They flatter to deceive with their crisp passing, as there is no end product. It's a matter of time before the Rams double their advantage. Again it's a well worked goal, this time from Conor Hourihane.
I engage with the guy sat the other side of me, despite him constantly refreshing his phone to view his live betting slip. He's happy that NFFC are losing in Bournemouth. I don't say goodbye when he leaves on 85 minutes. Bolton score an undeserved consolation goal on 93 minutes. It won't cheer up their huge following, who have been relentless with their singing and chanting.

I've been on a recce. 'The Lincoln' are here on Valentine's evening. Negotiations are taking place.

Do you want ketchup on your hot dog Ms Moon?

Man of the Match: Nathaniel Mendez-Laing

Entertaining anecdotes… from a Ram and CAMRA member!