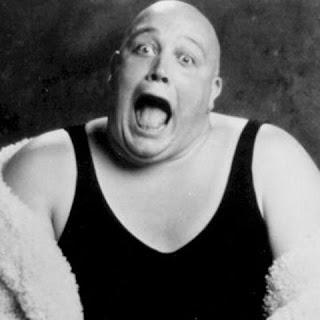 It's Maundy Thursday (the day before Good Friday for any kids that have just tuned in). I'm holed up in West Bridgford, a place I have a love/hate relationship with. I love a tick off and this teatime I'm able to chalk one off. Escabeche is an upmarket, independent Spanish tapas restaurant, located just off The Avenue, which has a maize of chain restaurants and high street coffee shops.
It's a posh nosh place that has somehow slipped under my radar in its 12- year-old history. It's a team building treat from our employer - a piss up in old money. I finish the evening off in the more familiar surroundings of a spit and sawdust watering hole called Stratford Haven. I quaff a few ales with 'Our Joe and my comedy gold 'Work Son', Tommy the Tottenham fan, who has kept my spirits up for the last 12 months as I recovered from major eye surgery. Clifton All Whites legend and friend to the stars, James 'Tosh' Turner pops in to say hello. 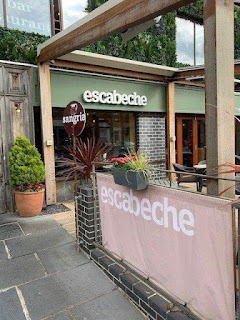 Good Friday is usually spent with Trumpy Bolton at some northern outpost. He's deserted me and betrayed me. Well, actually, he's with wife Jayne up in Barnard Castle, along with Dominic Cummings having an eyesight test at Specsavers.
I'm being a good lad as I've a hectic four days planned. It's a glorious sunny morning. Ms Moon and I walk the two miles into town (Nottingham). We drop onto a narrow pathway that leads us onto The Promenade, with it's wonderful bright coloured three storey terraced houses. This leads us through St Mary's Rest Garden, where legendary Nottingham boxer 'Bendigo' Thompson is buried. 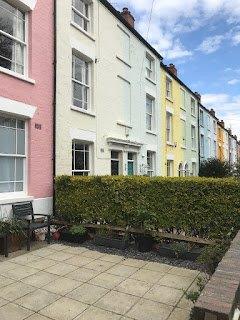 The city centre is alive with folk as NFFC have a 12.30 ko at Luton Town's Kenilworth Road ground - it's a place I've somehow never ticked off. A schoolboy error sees me have tapas twice in the space of 24 hours. We have lunch at ViDa by Lorentes, on Stoney Street, in the Lace Market.
After a heavy food shop, in the Marks and Spencer food hall, my patience is rewarded with a a few hours free time (drinking) - Ms Moon doesn't do daytime scoops. I peg it up Derby Road as word has it that a new boozer has opened. I enjoy a pleasant hour in the Whistle and Flute - an old tailor's shop. 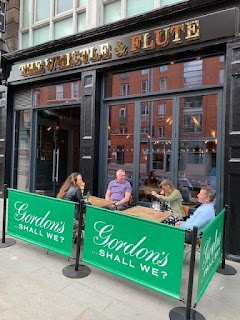 Tricky Trees fans are emerging from pub doorways in a right old two 'n eight. The Hatters have beaten them 1-0 in a game shrouded in controversy. They are angry and worse for wear. Can't win 'em all folks.
Saturday morning is spent pottering about in the garden. I've cut the grass and scarified the lawn. It's in a worser state than those Forest lads yesterday. We pop over to Bingham to see Ms Moon's granddaughter Bonnie, before heading west towards the old brewery town of Kimberley, once HQ to Hardy's and Hansons. It's another tick off -what a weekend - as we hook up with Mr John Harris and wife Jackie at Roots Micropub. I enjoy a Snake Eyes from the Black Iris stable as we bask in the early spring sunshine. 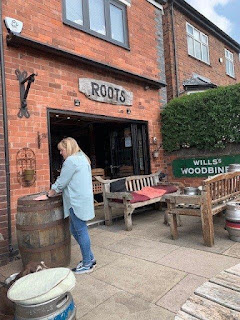 Kimberley Miners Welfare are on the crest of a wave and on the verge of being crowned champions of the United Counties League Division One North. A point today, against Harrowby United from Grantham, will kick-start the celebrations.
The town has turned up in large numbers to watch the champions elect. We stand on the far side of the Stag Ground at the top of a grass bank - my eyes work better with an elevated view. Exciting prospect Aaron Coyle opens the scoring on 7 minutes, but Kimbo look nervous and snatch at the chances they create. 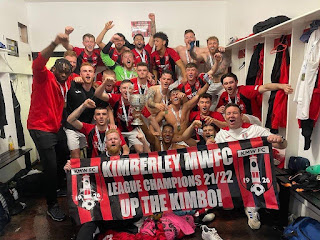 Ryan Wheatley looks to have put the game to bed and the champagne on ice as he doubles their lead. KMW had reckoned without the craft and guile of the game's best player, Jack Gurney. He pulls a goal back with a great strike and almost grabs an equaliser. The final whistle is blown, and the champagne corks are popped. We quietly slip away as I have a big night ahead.
Ms Moon drops me off at the top of Maid Marian Way. I wander down Chapel Bar, past Fat Cat, a bar/restaurant, whose windows were put in by neanderthal 'Leicester City fans' a few months ago. I grab a small Five Guys cheeseburger before heading up Market Street and crossing the road towards Lillie Langtrys 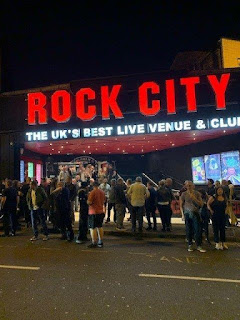 I enjoy a couple of real ales with Ackers, Coops and 'Widdow' in a bustling city centre. It's my first Rock City gig in over 30 years. Peter Hook and the Light are in the building. It's a fantastic evening and a cracking two-and-half-hour set. We have a few finishers in the The Bell Inn, to see the night off.
It's Easter Monday. We have a disappointing breakfast at the highly-rated Annie's Burger Shack in the Lace Market area of Nottingham. This is in contrast to a first-class Sunday lunch at The Plough, Normanton on-the Wolds, yesterday afternoon. 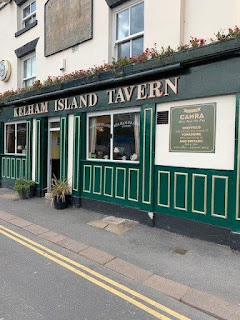 I'm literally back in town, a few hours later, hanging around the railway station. Tony Mac and I jump on a train to Sheffield. We're off to see Benefits, an issue-based music collective from Teesside. There's plenty of time for a reconnaissance for a future real ale trip to the 'Steel City' on May 20th. After a few scoops in the Kelham Island Quarter, we head down to Sidney and Matilda to see the gig. Benefits never, ever disappoint; tonight is no exception!
I meet up with a couple of Nottingham Forest supporters on Wednesday evening up at the Bread and Bitter on Mapperley Tops. We'd got chatting on Twitter where I found out they were looking to raise money to help the victims and bereaved from the Hillsborough Disaster get specialised therapy treatment - this includes NFFC supporters still traumatised by the events of that tragic day. I'm IN for the 20 mile walk starting and finishing at Anfield on July 2nd. 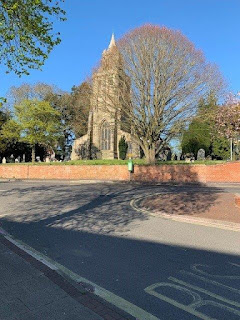 Friday teatime is spent in the village of Keyworth where I resided for over 45 years. We're raising a glass to the legend Paul 'Willy Gee' who recently passed away. The celebration of his life takes place at The Salutation Inn, where Brian Clough's chief scout, Alan Hill, was once landlord in the late 1980s. Willy had razor-sharp wit, was a mighty fine footballer and a good friend. Rest in peace mate, we all love you and miss you xx.
We finally reach Saturday. This time next week I will have some massive news to share with you all. I load up the boot with crap and scrap from the garage after a spring clean. It's emptied at a recycling centre near Nottingham Showcase Cinema. A mundane half an hour is spent in Dunelm buying quilt covers and bed sheets. Ms Moon drives up the A610 and onto the M1 North bound carriageway. 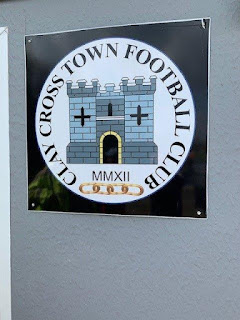 Paul Gambacinni is smashing it outta the park on Radio 2's Pick of the Pops. 1981 is the year and there are some belters including Rescue Me by Madonna. Star of the show is Buster Bloodvessel and his band, Bad Manners. 'Just a Feeling' is a song I haven't heard in ages.
We have to settle for a 'Meal Deal' in Tesco Clay Cross car park. Today's Central Midlands League North Division fixture could decide who wins the title as both teams are level on points and games played. 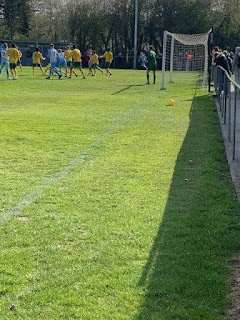 I love it up here and have been previously four or five times. The folk are so friendly and engaging. It's £3 each on the gate. We snap up 3x 50/50 draw tickets. The visitors, from Newark, are managed by former Lincoln City legend Nathan Arnold, who came close to giving me a heart attack live on BBC TV when he scored a last second winner back in 2017 to see off Ipswich Town in an FA Cup replay. St John's at Sincil Bank were on standby after that chuffer went in.
I'm unsure if there's too much at stake in the first half, but it's devoid of any quality or bravery on the ball. I don't do 0-0s and this has one written all over it. I'm dispatched to the tea hut by Ms Moon to see if we've won the 50/50 draw. I return pale-faced, lip wobbling and tears streaming down my cheek. "How the hell are we going to pay the gas bill?" 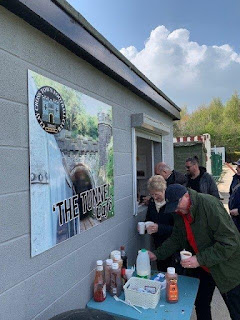 Thankfully there is a goal. The Newark striker smashes home from close range. Clay Cross are below par and will be bitterly disappointed. It was an enjoyable afternoon out in North Derbyshire though.

Man of the Match: Young referee was excellent.