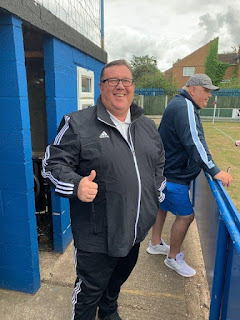 We're on the outskirts of the city of Bath, having just watched a wonderful game of football at the Memorial Ground. Ms Moon and I are both too fagged out to walk. We catch a bus back into town. The good lady goes back to our boutique hotel, whilst I take the opportunity to tick off a few more Good Pub Guide entries. The evening is spent in the back garden of The Boater. We end the night at a snug craft bar on Pulteney Bridge.

The M5 and M42 are very kind to us on Sunday morning. I'm propping the bar up of the Partizan Tavern on Manvers Street, Sneinton, by 2 p.m. I return home after a couple of sherbets to settle in for the evening and write up my blog. 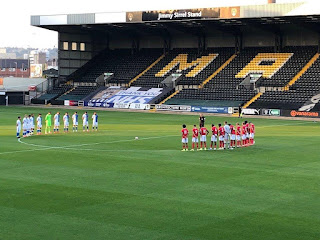 I'm quite chipper on Monday morning as I've clocked that Nottingham Forest U23s are playing Blackburn Rovers U23s across the river at Notts County's Meadow Lane. The two Nottingham clubs have patched up their differences since the fall-out with the Pies' previous owner Alan Hardy.

It's just shy of 7 p.m. and still stifling hot, as I part with £5 on the turnstile and 50 pence for a team-sheet. There's a healthy turnout of fans happy to watch any game right now, having been deprived for so long during Covid. I walk past ex Forest and Ipswich Town striker David Johnson, who is chatting to a couple of players. 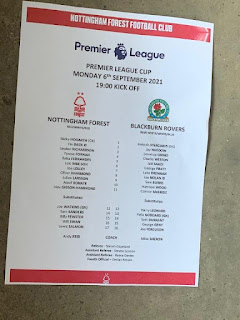 I park myself behind the Forest dugout where former Republic of Ireland international Andy Reid will be coaching for the Tricky Trees. Quite a few fans have made the trip down from the north-west, watching Lancashire CCC ending the day's play over the water at Trent Bridge Cricket Ground. Forest field a strong line up which includes some youngsters with first team experience. Joe Lolley gains valuable minutes. He bags a brace and sticks out like a sore thumb as Forest breeze to victory 4-1.

It's Tuesday evening. I slide open the French window door, leaving Ms Moon to Emmerdale Farm and Celebrity MasterChef. I've a spring in my step as I head down Burton Road. You can't beat a chippy tea folks; even more so if it's a tick off. They are queuing out of the door at Apollo Fish Bar on another baking evening. A cheery shop owner serves me up a 'Fish Special' for £3.99. It's not quite up to the standard of Oceans on Carlton Road, but nonetheless not a scrap of food is left in the tray as I deposit my chip wrappers in a bin next to the Inn For A Penny pub.

It's my first visit of the season to Carlton Town's Stoke Lane ground. I love a night out watching the Millers, under the floodlights. It's £9 on the gate. The DJ's set is like listening to Steve Lamacq on 6 Music. New Order, Mansun, The Fall and Echo and the Bunnymen are the stand-out tracks.

The Millers start like a train. They could be 4-0 up in the first half an hour. The impressive Niall Davie is denied a hat-trick by the woodwork and a goal-line clearance. The visitors, Sutton Coldfield Town, concede twice in the final 15 minutes. One of the goals is scored by 19-year-old Louis Czerwak, a lad Mick Leonard and I picked up for Notts County Academy, when he was playing football on Forest Recreation Ground, in Forest Fields, 10 years ago. 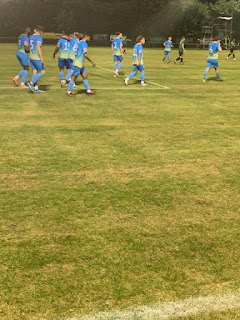 It's Friday morning and I'm on the phone to Nat West Bank, sorting out a five-year fixed mortgage rate on the house. The weekend starts for me today. I walk through Netherfield and cross the road onto Victoria Retail Park. I loiter outside the entrance of a DIY store as a silver-haired chap saunters in my direction. It's 'Chopper Harris', my hiking partner.

We stroll past British Car Auctions and cross over a small bridge onto a narrow path which leads us towards Netherfield Lagoons. Slurry used to be pumped into the lagoons from nearby Gedling Colliery until its closure in 1991. Some steps, close to a viaduct, lead us onto a footpath that runs adjacent to the River Trent. 'Chopper' spends most of the walk moaning about Gareth Southgate and his reluctance to use substitutes. There's more pressing matters like a pint of Guinness to look forward to at The Unicorn Hotel at Gunthorpe.

There's a chance encounter with an angry cyclist (aren't they all?) He nearly mows down 'The Carlton Stevie Wonder' on a public bridleway due to his wreckless cycling. He wants a scrap, folks. Chopper, a former paratrooper, who toured Northern Ireland during the Troubles, just laughs in the perpetrators face.

I'm out on my feet. I've already clocked up 15 miles. I shower, scrub up and head into Nottingham city centre. I make the fatal mistake of mentioning to Tony Mac, during our first craft beer of the evening, at Kean's Head, that I'm in no rush to return home as Ms Moon has her bestie, Jill, round for the evening. Eight pubs later I'm regretting this as Ms Moon waves a straight Red card at me on my return to HQ. Looks at this line up though: Six Barrels, Junkyard, Jam Cafe, Bunkers Hill, Neon Raptor, Liquid Light, Partizan Tavern and Fox and Grapes. 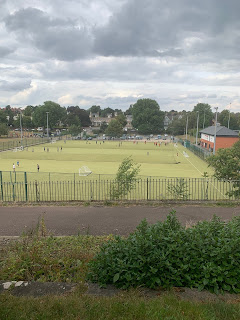 I'm dog tired on Saturday morning, but not particularly hungover - vegan beer doesn't have harmful chemicals. I rustle up a couple of bacon sandwiches topped with melted Harrogate blue cheese and some mayo - yum yum.

There's some last-minute holiday shopping for Ms Moon, who is flying out to the Algarve tomorrow with Jill. I was all set for a game at Southwell City's War Memorial Ground. The game has been postponed with no reason given - I did notice that the lads were on a team-bonding session in Lincoln last Saturday evening. 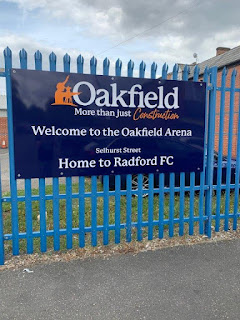 I scour the internet on the lookout for a fixture on a bus route not too far from Carlton, as I have to be back early as I'm on cooking duty. I scroll down the United Counties League and spot a beauty with my one good eye. One person won't be happy though and that's Big Glenn Russell, manager at Radford FC, who entertain Aylestone Park from Leicester, a club where Gary Lineker started his career.

I hop off the bus at the bottom of Carlton Road and peg it up Huntingdon Street where the nightclub Michael Issacs used to be, back in the 1980s. I frequented this dump on one occasion in 1987. Having been subjected to Alexander O'Neal, Luther Vandross and Womack and Womack, I was asked to leave for having the audacity to insist the DJ play The Smiths, 'Hang the DJ.' 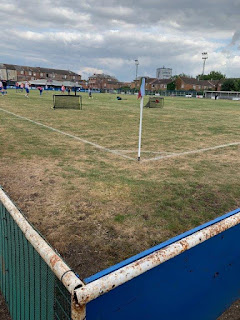 As I head across Mansfield Road I notice a police cordon outside a curry house. A man was stabbed twice in the early hours of the morning and is fighting for his life. I take a shortcut across Forest Rec (Goose Fair site). It's one of my favourite parts of multi-cultural Nottingham. There's a Big Top and circus in town.

If I'm honest, I get the welcome I was expecting at Selhurst Street, having paid 'ASBO' (the turnstile operator) £5 on entry. "What the f**k are you doing here, you Jonah?" Told you folks, the Big G isn't happy. Radford more than often lose with Sticky in attendance. Glenn's looking slick. Not sure if he's got Brylcreem in his hair or Wella Shockwaves mousse. We exchange insults for 10 minutes before I take up my viewing position close to the visitor's dugout. 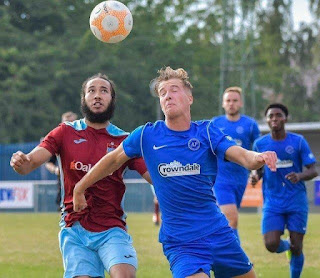 Radford look off it in the first half. They are second to the ball and can't string two passes together. Having said that they are given a golden opportunity to take the lead after what appears a soft penalty decision. The spot kick isn't convincing and is well saved. Aylestone Park fluff their lines in the penalty area as the score remains 0-0 at the break ( I don't do 'em do I folks?).

I can hear the winning raffle numbers being shouted over the PA system as I call up DG Taxis to book a cab. I rifle my pockets for my tickets that are tangled up in my mask along with my house keys. Jeez, my numbers are 111- 115 the winning ticket is  ... yes you've guessed it, 116 - 120. I have a private hissy fit. 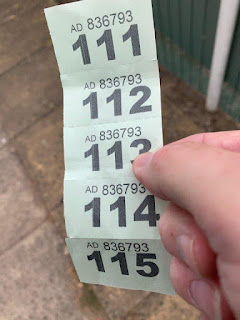 I stand in between the dugouts for the second half. The one-liners are worth the gate money alone. Crowd favourite Joe Meakin scores a worldy volley. The oppostion bench are whinging and moaning like mad. Their team lack discipline. Shay Brennan is sin-binned for mouthing off at the ref. He returns to the pitch to level the scores, converting a beautifully flighted cross by 8 jacket, the game's best player.

The Aylestone full back tries to steal a few yards from a throw-in. He has the misfortune to bounce off Big Glenn who was patrolling the lines. Glenn's eyesight isn't the best, but it's harsh (and foolish) that he's called a 'boggle-eyed' c-bomb by the player. Mr Magoo would be more apt.

I start to wander towards the exit as I know what's coming next. It's like the Greek tragedy that's played out each week at The City Ground. Aylestone score a scruffy goal in the dying embers. I jump into a taxi at the final whistle knowing I'm banned from the ground and blocked on Big Glenn's mobile until further notice.

Man of the Match: Big Glenn - Love him to bits.

Thanks for photos Cliff x