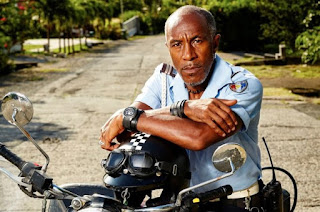 The FA Vase tie between South Normanton and Wroxham is in its dying embers. Visiting supporters chant, cheer and dance respectively, and in time, to the beat of a toy drum, hit with a stick of a joyous supporter. Grant Holt, he of Norwich City and Nottingham Forest fame, has turned this Cup game on its head, since his introduction from the bench, on the hour. The Shiners ('Normo') were running scared of the big man; showing Holt way too much respect and more importantly space. He silences the haters, who have hurled abuse at him all afternoon, with a virtuoso performance that rolls back the years.

We exit the ground, with minutes remaining, as it's obvious to all and sundry (apart from Club officials) that it will all kick-off at the final whistle. I barge my way through the 'South Normanton Big Babies Squad.' The terrace is strewn with cans of Bass Shandy. Their behaviour has brought shame and embarrassment on the Club. Or so I thought.

I tweet South Normanton to complain (there wasn't a steward in sight on our departure). They backheel the blame and refuse to accept responsibility for allowing and ignoring abusive hate-chanting. I'm immediately blocked by their Twitter account. I'm tipped the wink by a 'man in the know' of the name of the clown who runs their account. He's not so brave when challenged. 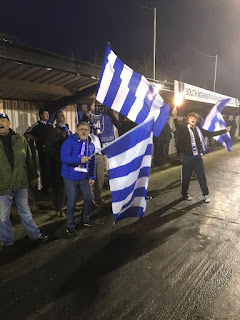 We're both delighted that Wroxham has made it through to the final sixteen of the FA Vase. Wembley is the prize, where the final two teams will tough it out. Sunday's blog is greeted with welcoming arms from the real footballing folk in Norfolk. The Chairman invites us to attend a game in the near future. I also learn that former Norwich City legendary left-back Adam Drury (wand of a left foot and 326 appearances) is The Yachtsmen's assistant manager and that Chris Sutton's lad also plays in the nets for Wroxham.

The blog didn't go down too well with the 'Baby Squad.' The English department at Frederick Gent Comprehensive School (in the village) has failed miserably if their grammar, spelling and punctuation is anything to go by, from the tweets aimed in my direction.

It's Tuesday evening and I'm sat in the 'Rolls Royce' outside 'The Taxman's' abode (mansion) in the village of Plumtree, where the greatest player I ever saw, John Robertson, once used to reside. 'The Taxman' traipses down his crazy-paved drive, throwing a couple of coats on the back seat before settling in 'shotgun.' 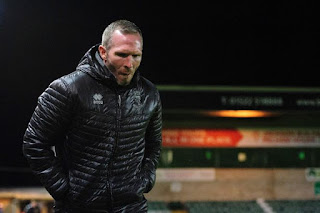 The brilliant Burnley-born broadcaster, Tony Livesey, is on Five Live's Drivetime show. As per chuffing usual BREXIT is the topic of conversation. I mention to 'The Taxman' of our recent trip to Sunderland and what the future holds for the city should the Nissan car plant close, as is widely predicted. Night shift has already been knocked on the head and 70% of cars produced are sold to the E.U.

Destination tonight is the love of my life, (Sincil Bank) home to the Mighty Imps. It's a team in transition. Flying winger, Bruno Andrade, has jumped ship to Salford City (could have graced the Championship) - with rumours of further departures for Michael O'Connor and fans' favourite Harry Toffolo.

I always park up on St Botolph's Crescent, just off Robey Street, as it's where my Nana spent her final years before passing away in 1994, at the age of 94 years old. I'm very superstitious when it comes to watching 'The Lincoln.' I've never seen them lose a League game when I've sat in the Selenity Stand, but tonight it's sold out. The only available seats left are in Block One of the Stacey West Stand (named after two supporters who lost their lives in the Bradford City Fire Disaster in 1985). 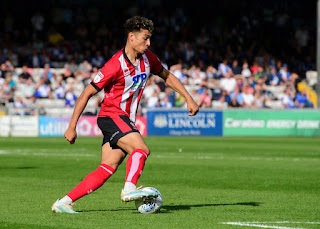 I'm always edgy and irritable before any Imps game. I was the same when I coached my local village team. A walk up the High Street takes my mind off it. The gates at the railway crossing are closed as the warning lights flash. A freight train with endless wagons chugs by towards a terminal on the east coast.

We take a left-hand turn down a narrow passage called The Glory Hole, adjacent to Lincoln's oldest cafe, Stokes, where I spent many a happy childhood hour with Grandma, Grandad and Mum. Tea is taken at ASK Italian on Brayford Wharf - 'The Lincoln' never lose when I dine here. The service is usually spot on - tonight it's an omnishambles. I hear a plate smash on the kitchen floor (my Ravioli) We're offered free drinks and told 'The Taxman's' 'chips are burnt'. After negotiation and use of a Tastecard, it's £20 all-in for two courses - not bad eh - I can't 'arf pick 'em.

We head towards Sincil Bank, turning left off High Street, onto Scorer Street, the birthplace of Lee Chapman, who scored 179 top-flight goals in England. Bloc Party, Shed Seven and The Charlatans are part of an excellent set by 'The Lincoln' DJ. 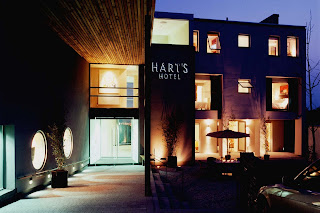 I had hoped to see the home debut of Arsenal loanee, Tyreece John-Jules, but sadly he took a knock at Shrewsbury on Saturday. He's the nephew of Sticky's favourite ever TV copper, 'Dwayne' (Danny John-Jules) off BBC One's Death in Paradise.

City's opening goal is to die for. There's a give and go. Toffolo whips a cross in which Harry Anderson reacts to the quickest, darting in from the right, catching the Bolton backline flat-footed, before planting his header into the roof of the net. It gets me jumping out of my seat.

Bolton have brought near on 1000 supporters; not bad for a school night, eh? They are second best for the first 45 minutes, but Lincoln can't finish 'em off. Manager, Keith Hill, makes a change at the break, with The Trotters coming out all guns blazing. They score a belter after good play by journeyman captain Daryl Murphy. They get on top and put City under the cosh. Shots rain in on the Imps goal, fortunately, most of them whistle over the bar. 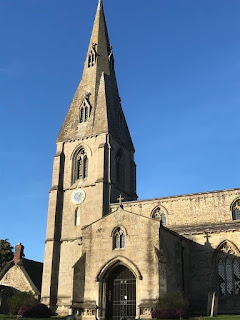 The jury's out on Big John Akinde, but he proves to be a game-changer on the hour, with what might be his final ever game at Sincil Bank. Tyler Walker picks a ball up 22 yards out and unleashes an unstoppable swirling shot into the top right-hand corner. City run riot in the final five minutes scoring three times without reply. There's a spring in my step on the walk back to the car. The Taxman is mightily impressed with some of the 'Champagne football' Michael Appleton's men have displayed.

Friday night is spent 'early doors' in the Crafty Crow on Friar Lane, next to Nottingham Castle. Full Nelson, from the Wylam Brewery, based in Northumberland, is the pint of the season. We trudge up the hill past the old Nottingham General Hospital. Dinner is taken at Hart's Hotel. The food is to die for. Ms Moon has Sea Bass, whilst Sticky tucks into flat iron of beef. Stinky cheese is shared for dessert. It's the sublime to the ridiculous as we have a nightcap at Nottingham's best 'Spoons, The Roebuck Inn on St James's Street.

I drive up Carlton Road and sweep past the King Billy pub, another favourite of mine, in Sneinton. Today, Cottesmore Amateurs play Allexton New Parks in a top of the table clash in the Leicestershire Senior League. 'The Big Man' (the artist formally known as 'White Van Man' or Bish, lives on the 'Keyworth Bronx.' The view towards the village of Bradmore from his back garden, is ridiculous. 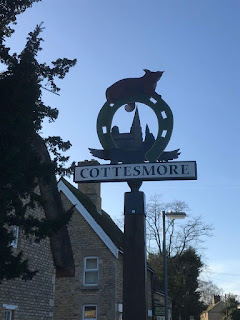 'The Big Man' drives like he's on the virtual reality game Grand Theft Auto. Corners are met on two wheels and everyone in the village gives way to him. To be fair, the trip to Leicestershire is steady, without incident and minus Century FM. He's happy as Larry after spending Christmas in the polar opposites of a blustery Newquay, Cornwall and the Canary Island of Tenerife.

Cottesmore is negotiated within 45 minutes. I take a few snaps as 'Bish' gets his walking boots on. It's £2 on the gate and the folk are very welcoming and friendly. A guy who looks like ex-Grandstand presenter Des Lynam gets gassing. I recognise him from the Notts groundhopping scene. He follows his son who is a referee's assistant in the East Midlands Counties League.

There is a lady assistant running the line today. When I coached last year she refereed one of our games. She was bloody brilliant and easily the best official we had all season. I've told 'Bish' that the game will be a cracker, and so it proves to be. 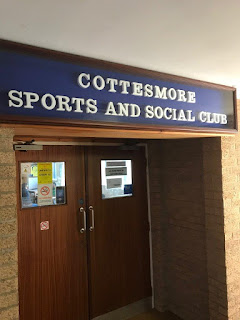 An 'official' from Allexton gets chatting to us. He says only having 10 men in the previous fixture versus Cottesmore cost them three points. My experience of this League hasn't been the best, with many a Red card waved by the man in black.

'Our Man' from Allexton has loads of gas. It's zipped up early on after a thunderbolt of a free-kick by the home 11 jacket. He gasps and comes up for air with a string of C-bombs. It gets worse for 'Our Man' with a two-footed lunge five yards from where we are stood. It's a straight 'Red' and more C-bombs.  Cottesmore go for the jugular but can't finish 'em off. Allexton are galvanized and restore parity before half-time. I grab two teas and some chocolate at the break. Incredibly they go 2-1 up and deservedly so too. The game is like a Cup tie, but Allexton, despite being a man down, want it more. 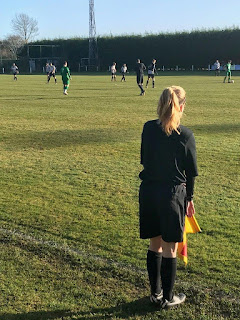 We meet an elderly gentleman with a camera. He asks us how old he is? Bish says 21 and I say 80. "88 and a half" he proudly announces, "and I've marked out this pitch for years".

Cottesmore make it 2-2 with a header from a corner. Allexton are first to everything and play with massive hearts. They win the game after a faux pas by the home 'keeper, who gifts a visiting forward the winning goal.

Attendance: One Man and His Dog

Man of the Match: Gentleman 88 and a half years old.
Posted by Sticky at 7:57 PM