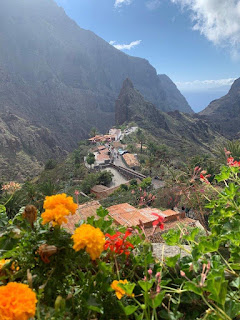 We're approaching a windswept Tenerife South Airport at just gone 2 p.m. on Friday November 8th. It's not my finest moment to mention to a petrified lady passenger, sat adjacent to me, that in 1977 two Boeing 747s collided at Tenerife North Airport resulting in 583 fatalities - the accident is the deadliest in aviation history. Just as our Jet 2, 737, wheels are about to kiss the tarmac we feel a sudden swoop and thrust as the plane soars back into the air - it's my first aborted landing in over 40 years of flying. There's a round of applause following success at the second time of asking. I'm still apologising profusely to the ghost-white lady passenger as we disembark the plane down the steps.

A few hours later the 'Big Man', 'Bruiser' 'Mad Dog' and 'Hopper' are sat in a sun-kissed beach bar downing alcoholic beverages whilst staring out at all the surfers skillfully negotiating the ocean waves. The first three days are always the toughest to cope with - the late nights and gin-fuelled evenings are alien to me. I'm normally tucked up in bed with my Kindle, back home, before Huw Edwards has shuffled his script and has finished the BBC News bulletin. 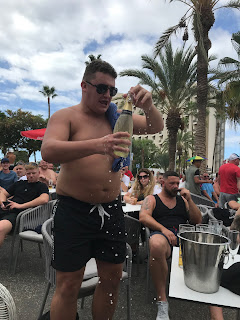 We congregate at Leonardo's, in Playa de las Americas, on Saturday lunchtime for the 'A52 Derby' between the Tricky Trees and D***y Clownty - as Jim Bowen used to say on Bullseye, I hope disgraced Sheep striker Tom Lawrence has got his 'bus fare home.'

All the lads are getting stuck into a few sherbets and it's not even siesta time yet. There are a few Rams supporters scattered about the bar. They're none too impressed when we jump out of our seats and do the Moonwalk after Lewis Grabban opens the scoring following a faux pas by Jayden Bogle. The funniest moment is on 70 minutes when a lad from Sleaford waltzes out of the bar with a bucket full of ice and a bottle of champers swimming on top. It could have been the kiss of death, but it sets the tone for the rest of the day when the cork is popped and the bubbles are poured at the final whistle. 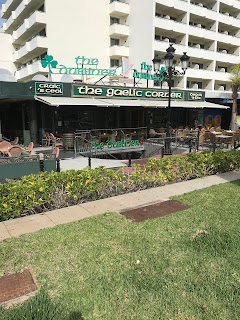 The evening (early hours) ends in the usual Gincident for Sticky Palms. I successfully, somehow, arrive home solo and unscathed following a session at The Dubliner. I've two security gates to negotiate before I can hit the sack - sadly my room card is as dead as a dodo. Despite three 'angry' (quite cross) phone calls to Reception, it's another 20 minutes before Security rock up and bundle me into my room.

I'm greeted in the late morning by a letter from the hotel Customer Relationship Manager that has been slid under the room door. Perhaps they want to apologise to me? They've asked for a meeting between 5 p.m - 8 p.m. - crikey I'll have been on the sauce by then watching Liverpool v 'City.' 'Mad Dog' takes a call from them later in the evening. I'm on a yellow card for aggressive behaviour towards the staff - I keep my head down for the rest of the holiday. 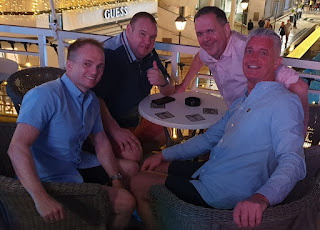 Tenerife is a beautiful island with some hidden gems. We enjoy a 12 mile-round walk to the harbour village of La Caleta. Tapas and a carafe of Rose wine are shared. The following day we visit the wonderful seaside town of Los Gigantes. The Big Man kindly drives us up into the hills of the north-west of the island, where we take in the breathtaking views in the beautiful hamlet of Masca, with its ravines and narrow gorges. The Big Man usually drives like he's the getaway driver on Grand Theft Auto. To his credit, he takes it's steady and shows some courage in difficult conditions as the mist rolls in.

We land back at a bitterly cold East Midlands Airport. I arrive home in driving rain at 10 p.m. Arranging a day out in Cambridgeshire and Norfolk tomorrow doesn't seem such a good idea right now. Ms Moon is out for the day with her daughter who is back for the week from Coventry - a place I have been sent to on numerous occasions. I leave our house in Carlton, two miles outside Nottingham city centre at 10.15 a.m. I yawn the entire way to the village of Keyworth.

Last week whilst I was in 'The Reef' my local cricket club had the biggest night in its 200-year-old history. Keyworth Cricket Club along with the Caribbean island of Antigua, formed a partnership and created an exchange programme which allows youngsters to experience cricket and culture in different parts of the world. Don't ask me how but Sir Vivian Richards and Test Match Special commentator Daniel Norcross gave up their time for a question and answer evening at the 'New Field of Dreams.' I was gutted to miss this, as I too was indulged in a culture of Tapas and gin-swilling in Tenerife. I hope somebody asked Sir Viv about his 232 at Trent Bridge that I witnessed as a 12-year-old boy sat by the boundary rope for the entire five days in 1976.

I pull onto Spinney Road; an area locally known as the 'Keyworth Bronx.' Even with my appalling eyesight, I see in the distance blog legend Trumpy Bolton swinging his Kwik Save carrier bag full of Strongbow Dark Fruits. It's his first outing of the season since Boreham Wood last May. 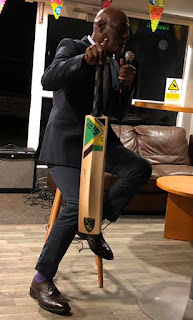 Breakfast has been a complicated affair for TB this morning. Mrs Bolton was on a work outing the previous evening in Leicester. The good lady left him a curry in the oven to warm up for his tea. Unfortunately, Our Man got waylaid in the Three Crowns in Wymeswold (co-owned by Stuart Broad and Harry Gurney). Having got stuck into a few ales, Trumpy was then offered complimentary sausage and chips for supper. Breakfast was chicken curry with rice, accompanied by two bottles of Black Sheep, following a recent visit to the brewery in Masham, North Yorkshire.

He waxes lyrical about his long weekend in Southampton. He rubbed his eyes in disbelief as his beloved Foxes racked up NINE goals without reply. I remark that I was fuming after placing a 50p bet at half time that Leicester would win 8-0. Jamie Vardy's goal, which was the last kick of the game, scuppered any chance of a return. 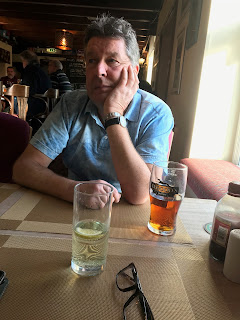 The first port of call is Peterborough Rowing Club where we pick up a mutual friend and great pal of mine called Ackers, who was also once from the Parish of Keyworth. Trumpy and Ackers chat away as Rock the Casbah by The Clash plays on Union Jack Radio. Trumpy's cans of cider are a distant memory as we park up in the Fenland market town of Wisbech for a quick drink (lime 'n soda for me) at the Red Lion.

Bolton licks his lips in anticipation at the thought of ticking off a new Wetherspoons pub. The Whalebone is a new build in Downham Market. I'm disappointed by the choice of guest ales that are on, so choose an Adnams Ghost Ship at £1.99 per pint. Trumpy is in overdrive; sinking another two pints to match his efforts in the previous hostelry. 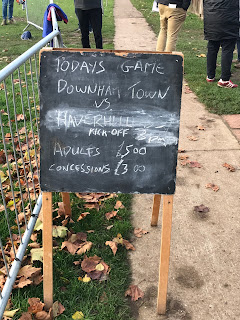 The last time I visited Downham Market was in 1978 on a geography school trip. We later went onto Kings Lynn to visit Lockwood's fruit factory and to see all the Skoda cars shipped in from the port of Hamburg. Downham Town's Memorial Field ground is half a mile from the 'Spoons pub. As usual, my parking is abysmal. Trumpy kindly pays me in and buys me a programme before disappearing into the clubhouse for a session on Newcastle Brown bottled ale. (Ackers, thanks for lunch Son).

The ground has a homely feel about it. It reminds me of Keyworth village recreation playing fields. A cricket pitch is roped off. On the far side of the ground there are three different covered stands. I enjoy a stroll with Ackers around the tree-lined ground, admiring the changing colour of leaves. 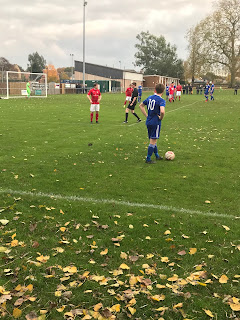 The visitors from Haverhill, across the border in Suffolk, look sharper and hungrier in the first thirty minutes. Downham start to wear them down and create openings. They take the lead shortly before half time. We received a warm welcome on our arrival from the media/twitter guy. I love the little quirks about the Club - the whiteboard with the team line-ups including subs and the PA man who also reads the teams out.

Ackers and Trumpy are holed up in the bar as I join an ever-increasing crowd on the nearside of the pitch. Crowd favourite 'Jock' scampers down the wing before delivering an inch-perfect cross which a sliding Robbie Priddle gets a boot onto the ball to complete a brace of goals. 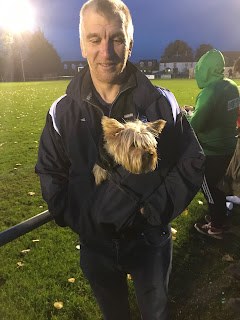 We say goodbye to Lulu the Yorkshire Terrier and Blaze the three-month-old Husky puppy belonging to a Suffolk groundhopper. It's been a long exhausting week and my bed is calling.

Man of the Match: Big Man for driving up those hills in Tenerife.
Posted by Sticky at 7:37 PM