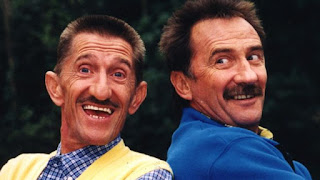 The Hatters of Stockport are due to play the Pies at Meadow Lane this evening. I enjoyed watching them roll over Boston United at York Street last season in the National League North. Their star man, Matty Warburton, has left for Northampton Town. Former ex Blackburn Rovers trainee striker, Alex Curran, will be warming the bench for them. I'm excited by the 20-year-old who impressed me on a couple viewings at Colne last season. It's a shrewd piece of business by Stockport manager 'Big Jim Gannon.' Remember the name, Alex Curran.

I have a pre-match bike ride down the River Trent, past Nottingham Forest's City Ground, doing a full circuit of the rowing course at a windswept National Water Sports Centre at Holme Pierrepont, before throwing the bike into the boot of the car at Nottinghamshire County Hall. I take a short stroll over Trent Bridge. The Embankment pub is a listed historic building where Jesse Boot opened his first dispensary back in 1905. It's also where I'll have my tea tonight. Homemade chilli con carne is washed down by a pint of Sleepwalker; a current favourite real ale of mine from the Castle Rock Brewery. 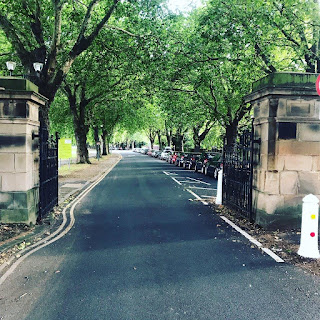 I'm sat in the ground a full forty-five minutes before kick-off, as I enjoy the build-up to a game. It's been a horrible twelve months for the Magpies' supporters. Alan Hardy's business went belly up, which resulted in the owner putting the club up for sale. They now find themselves, for the first time in their long history, out of the Football League.

The match is a cracker for the neutral. Stockport have a following just shy of 1000. It adds to an already good atmosphere created by Notts' fans on the Kop. Jim O'Brien gives the Pies the lead with a curling shot from outside of the area. Stockport fluff their lines in front of goal time and time again before equalising in the second half through Elliot Osbourne, following a sublime passage of passing and movement. They will wonder how they didn't leave Meadow Lane with three points. It could have been much worse had Dutch winger Enzio Boldewijn not blazed over in the dying embers of the game. 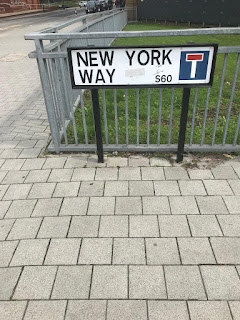 At the match, I had a good chat with the father of Everton defender Mason Holgate. He's best mates with Mitch Roses's Dad (Rose plays for Notts). Both players grew up in Doncaster. Holgate's Dad, a lovely bloke, explains that his son hasn't had a sniff since Marco Silva was appointed Toffees' manager. He was shipped out on loan to West Bromwich Albion, where he enjoyed his time playing for the Baggies and then manager Darren Moore.

It's Saturday morning and game day. I'm so excited about the trip up to Rotherham. I drive over to the village of Keyworth, my old stomping ground, to pick up some medication - those blood pressure tablets might come in handy later today. 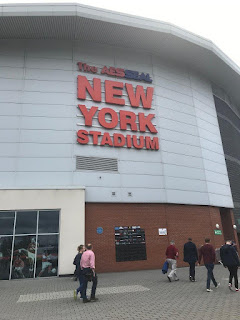 I hear the doorbell go. I race down the stairs and open the door expecting Jeff Brazier to be waving a big, fat cheque in my face from the People's Postcode Lottery for £30,000. It's the window cleaner; he wants £21

Kim, Aggie and Mrs Doubtfire would have been proud of my efforts with Henry the Hoover this morning, as I attack upstairs and downstairs - I end up with quite a dab on. Ms Moon has kindly packed a few sandwiches, as we head out of the door just after 12:30 p.m. The drive up north should be a formality - of course, it isn't.

Sweet mother of Jesus, Ms Moon has Virgin Radio on. There's only so much soft American rock I can stomach since the cruise. I flick over to Union JACK radio. My faith in British music is restored with the excellent cover version of Eloise by punk rock band The Damned. Ms Moon soon has the bottom lip quivering as she loves a bit of Pick of the Pops on Radio 2 hosted by Paul Gambaccini. 1968 is a cracking year for music. 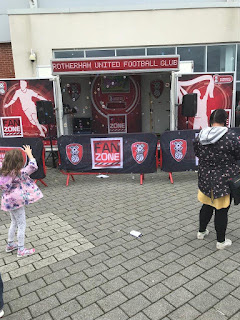 The M1 is gridlocked between Junction 32 and 33. Sat Nav re-routes us off at Junction 31. The remaining ten miles takes longer than a week in prison. There's the usual spat about where to park the car before we stick it in a spot a few minutes' walk away from the ground.

Rotherham has a population of 110,00 people. It was once well known for its coal mining, steel industry, glass making and flour milling. It is the hometown to the Chuckle Brothers, Jive Bunny, David Seaman, William Hague and Coronation Street actress Lynne Perrie (the sour-faced fag ash Lil Ivy Tilsley).

Rotherham United were founded in 1925. They're nicknamed The Millers and previously played their football at Millmoor until 2008. I remember going up there during the Miners' Strike in the mid-80s with some Notts County fans. It got tasty after the match, and we were chased out of town.

I have a trot around the New York Stadium, taking some snaps, as it's a ground I've never ticked off. There's a poor turnout in the Fan Zone despite one of Katy Perry's better tunes blasting out of the PA system.

Ms Moon and I stroll up to the visiting end turnstiles. There's already a massive queue and a bit of a commotion. Turns out one sniffer dog has the unenviable task of poking his or her snout into the pocket area of every supporter. It's £22 for the ticket; I don't bother with a programme - the Groundhopping Gestapo will disown me. Anyhow, I can get the team lists off twitter. We're housed in the Meditemp South Stand. 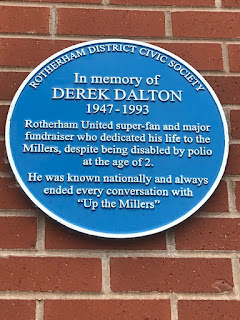 It's a nice enough ground and the seats I've bought are spot on. The DJ spins Anastasia and the Rolling Stones before playing a New York medley of tunes. The teams emerge from the tunnel. I'm astounded by the size and height of the Rotherham players. I ask Ms Moon if we have mistakingly found our way into the Rotherham Titans Rugby Club. Matt Rhead would have been licking his lips at the prospect of a ruck with these lads, sadly he left Sincil Bank a couple of weeks ago.

Lincoln and Rotherham were two leagues apart last season. This will be the stiffest test the Imps have had since visiting The Emirates in 2017. City are under the cosh from the first whistle. A swirling 40 mph wind doesn't help our cause. We can't get our passing going and aren't picking up the bits. Poor finishing and stoic defending keep the visitors in the game. Lincoln refuse to buckle and aren't intimated by the size and strength of their opponents.

John Akinde and Bruno Andrade both fail to make the starting line-up despite bagging 25 goals between them last season. Tyler Walker, son of Nottingham Forest legend Des Walker is on a season-long loan from the Tricky Trees. He ploughs a lone furrow up top for the Imps and is starved of the ball. 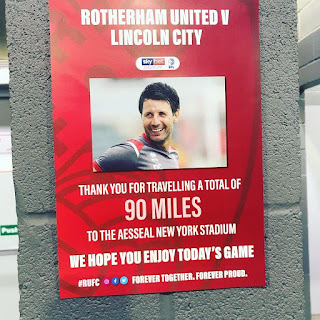 Totally against the run of play the Imps take the lead. Captain Neal Eardley slips in Tyler Walker with a quickly taken free-kick, Walker powers to the byline before firing over a cross that is turned into his own net by Macdonald. The 2,320 travelling fans celebrate in disbelief. I knock Ms Moon's sunglasses off her head after barging into her whilst jumping up and down.

We draw for breath at the break. Ms Moon rummages around in her 'magic bag' and produces a chocolate mint Aero bar. I chat with some supporters sat behind us and catch up on all the gossip. I ask why Bruno Andrade hasn't started. They seem to think the fleet-footed winger has been unsettled by all the transfer talk.

Andrade's replacement, Jorge Grant, swings in a pinpoint corner on 48 minutes, it's met by the head of Harry Anderson on the near post to put the Imps two to the good. A shellshocked Rotherham are left reeling. City start to play some champagne football with diminutive, play-making, attacking midfielder Jack Payne pulling all the strings. This lad looks a bargain free transfer from Huddersfield Town. I say to Ms Moon he's the 'Lincoln Messi.' 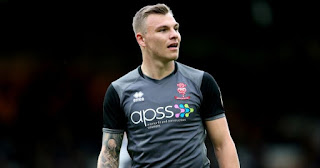 The Millers throw the kitchen sink in a last-ditch effort to gain something from the game. Imps keeper, Josh Vickers, shows a safe pair of hands. He pulls off a world-class save with a few minutes remaining, getting down quickly, low to his right, to push a goalbound effort round the post.

The home fans are leaving in their droves. 'The Lincoln' wave them goodbye. At this rate, they'll all be home in time for the Brookside omnibus edition on Channel 4. We stay on to clap the lads off. To a man, they are out on their feet. The effort levels, refusal to lie down and the winning mentality instilled into them by the Cowley brothers, have seen them over the finishing line.

The stewards are over the top and unpleasant on our way back to the car. They lack wit, brain cells or humour too. "Chill out lads, go and download some Jive Bunny off Spotify," I remark, as Ms Moon and I pick up speed, mindful of my last visit to Rotherham United.

Man of the Match:  Jack Payne.