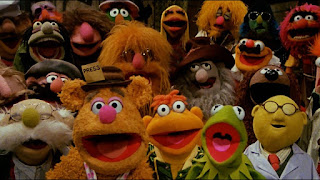 I'm fagged out on Sunday morning after yesterday's long trip to Forest Green Rovers in Gloucestershire with Trumpy Bolton. We popped into the Pear Tree in Keyworth, an old haunt of mine, for a quick jar. I was hoping some of the lads from the team I'm going to run, Keyworth United Development, would be sinking a few scoops in the bar, celebrating coming back from 2-0 down to win 3-2 against a side who had only lost once all season. I can see from the WhatsApp group that they're all getting showered, shaved and groomed for a big night out that will last into the small wee hours.

Ms Moon and I head south of the water for a change, into 'Bread 'n Lard Island' (West Bridgford).  It's full of well-to-do and high society. The social media rumour mill is awash with tweets that suggest that Lord James Turner of Clifton has upped sticks and pitched up in the land of fur coat 'n no knickers. It won't be long before he's sporting a flat cap, tweed jacket and Oxford brogues.

We enjoy an excellent breakfast served up at Cote Brasserie on The Avenue, before stretching our legs for three miles around Rushcliffe Country Park, Ruddington, an area of Nottingham that I have worked at for near on 15 years. After the walk, I enjoy a pint at The Embankment in 'North Bridgford' before hopping on an NCT bus into town, where I wander down to Hockley and call by the Fox and Grapes in Sneinton for much-needed refreshment. I pore over the Sunday papers and glance at the League Two table. What a sorry state of affairs there is at Notts County right now. They were gubbed 3-0 at home to fellow strugglers Cheltenham Town in a vital six-pointer. They are managerless and rudderless - let's not forget they were favourites to win the League at the start of the season 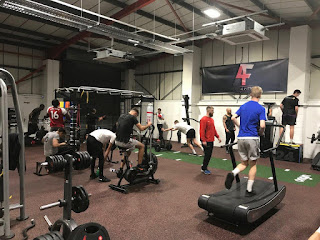 Tuesday evening is spent up in Mapperley Tops at Gedling Miners' Welfare on a bitterly cold evening. I make my seasonal debut at the Plains Fish Bar where a small fish, chips and curry sauce is the bargain-price of £4.20. The chips are down at the Welfare as the Miners' have had a run of bad luck and misfortune. Popular manager Chris Marks has taken a break. I'm still met with a cheery smile by Clubman Tony Hay. Gedling twice blow a one-goal lead, before bowing out of the League Cup 3-2 to a slicker, fitter outfit in Belper United from Derbyshire.

I'm chuckling to myself on Wednesday tea time as I drive over Lady Bay bridge towards Keyworth. The management team has organised a one-hour boot camp for the lads at a new gym on Debdale Lane Industrial Estate in the village. Every single lad turns up; I feel really proud of the team spirit that has been fostered in recent months. I stand and admire the boys grafting and sweating their gonads off.

This weekend will be the last time Ms Moon and I can go away for a while, as I take charge of the team as Manager from 1st December. I won't be blogging every week, but hope to post some ramblings on a fortnightly basis. 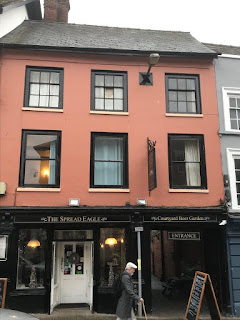 I feel a bit light-headed on Saturday morning courtesy of a Tesco finest Shiraz that was on special offer. We're on our way to Herefordshire at just gone ten bells. The journey is seamless apart from the Graham Norton Show and the dire choice of music he plays. The plan is to spend the night in the sleepy market town of Ross-on-Wye.

I thought it be best to park the car at the football ground and walk into town. Despite the traffic being gridlocked we manage to shoehorn the car into a space in an overflow car park. Lunch is spent at the Spread Eagle, a bustling, traditional city centre pub on King Street. Ms Moon loves a homemade fish finger sandwich that's accompanied by some dirty fries. 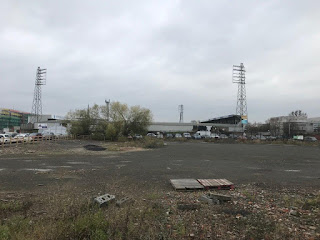 Hereford is a cathedral city and county town of Herefordshire which lies on the River Wye and has a population of just under 60,000 people. It's 16 miles east to the border with Wales. The British Army Special Air Services (SAS) are based in Hereford. Major employers in the town include: cider producer Bulmers and Cargill Meats (formerly Sun Valley) - the Wye Valley Brewery and Weston's cider are also from the area. The puppeteer for The Muppets and Yoda from Star Wars, Frank Oz, was born in Hereford as was singer Ellie Goulding and Crystal Palace footballer Connor Wickham. 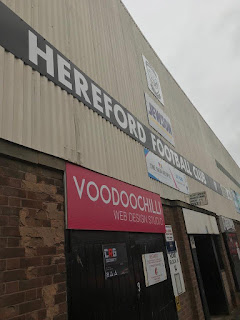 Hereford FC were founded as a phoenix club to Hereford United FC. They inherited the Edgar Street ground. In 2016 they reached the FA Vase final at Wembley, only to lose 4-1 to Morpeth Town from north east England. Controversially the club sacked popular manager Peter Beadle in September of this year. They somehow find themselves playing in the National League North - don't ask me, haven't a clue, but it must include some gruelling journeys up and down the M5 and M6. Today is an FA Trophy tie, with the visitors F.C.United of Manchester making the 290-mile round trip.

We had hoped to see Ronaldo the bull take his customary parade around the ground, but there's no sign of the old lad. At least he enjoyed his day out at Wembley. The visitors from Manchester also have a new manager in Neil Reynolds who they snared from Bamber Bridge, close to Preston. 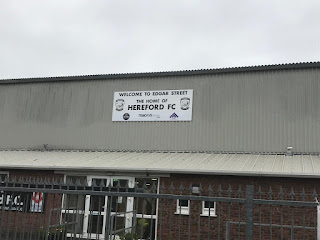 It's £15 to sit in the Len Weston Stand and £2.50 for a programme. The stand is steep and affords the supporter a panoramic view of this wonderful old ground and city. The home officials make a fuss of us and are super friendly and polite. 135 supporters have made the long trek south. The DJ is having a throwback to the 1970s as he plays Chic, Sister Sledge and The Whispers.

F.C. United are wearing their famous red shirts and white shorts - Ms Moon enquires as to which team is 'United.' Despite constant pressure by the Bulls, it's the visitors who take the lead against the run of play with the ball fortuitously falling to Jack Banister, who lifts a shot over the 'keeper and into the net. Hereford are in debt to their shot-stopper, Matt Yates, who makes two fine saves before the break. 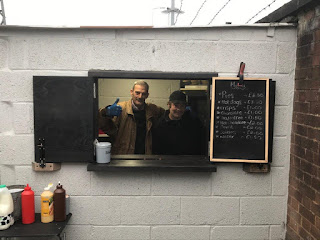 Hereford continue their good form from the first half and draw level from a corner with an excellently executed header from Cullinane-Liburd just after the restart. Minutes later half-time substitute Tommy Sullivan smashes a shot which hits the back of the net to put the Bulls 2-1 ahead - it's nothing more than they deserve. They put the game to bed on 79 minutes with a goal from hardworking striker Mike 'The Beast' Symons to put them into the hat for the first round draw. One or two United fans have breached security and are now sitting up in the stand with us, rather than on the terrace. They try to rally their team, but there's nothing left in the tank; they are running on empty.

Man of the Match: 'The Beast'