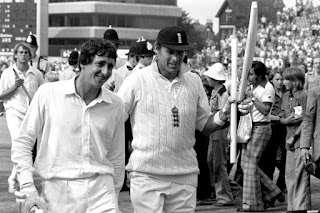 The Big Man's 'death ride' gets us back in the village of Keyworth, in Notts, within the hour from Stafford. If you're planning to rob a bank or steal a cash machine and need a getaway driver, then look no further, the Big Man is yer man. I jump in my car, drive past the award-winning Plumtree Fish and Chip shop, onto Normanton Lane, before turning left up Plumtree Park. It's Keyworth's version of Bread 'n Lard Island, where folk are mortgaged up to the hilt, and is also home to the 'Mayor of London.'

The 'jam fool' is having a soak in the bath. We watch the fag end of Liverpool v Chelsea before driving over to Carlton. The rest of the night is spent in Nottingham city centre quaffing real ales and putting the world to rights.

On Sunday I drag my weary body out of bed at gone 11am; this ill-feted Ashes series is killing me. I've arranged to meet 'The Keyworth Georgie Best' (Sticky jnr) outside the Nottingham Forest club shop at 12.30pm. Neil Warnock's high-flying Bluebirds are in town this lunchtime. Dad and junior are sitting in the notorious Main Stand 'A Block' (Peter Taylor Stand). It's my first visit since 'King Billy' lost his crown three years ago. Mark Warburton is the latest incumbent. The jury is still out on him. He was lucky to inherit a good side at Brentford when Uwe Rosler upped sticks to the pie-eating capital of Wigan, and made little impression up in Scotland, at Rangers, with a string of poor signings with results to match. 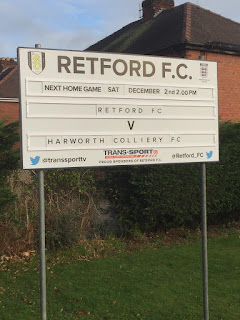 Forest are woeful in defence. My mate Druers' and Sticky's favourite, the Canadian "Junior" Hoilett leaps unmarked to nod a header home. A 25-yard pile-driver from Danny Ward soon sees Sticky junior ripping up his betting coupon and sprinkling it as confetti. On a positive note the NFFC DJ was on flames playing a number of classic indie tunes. Warnock gets dog's abuse from the Forest faithful. He cups his ear, begging for more.

Monday night is spent fielding a flurry of phone calls from stressed out, anxious ITV executive producers from Tipping Point, The Chase, Emmerdale Farm, Corrie and I'm a Celeb, who are concerned about dwindling viewing ratings. They're keen to understand why my TV hasn't been switched on for four days. I deliver the bad news that the Princess is out of office in Africa, and that I won't be watching such drivel.

I'm up in York on business on Tuesday, but manage to get back in time for an East Midlands Counties League cup tie between West Bridgford and Big Glenn Russell's Radford FC. I have the hoodoo sign over Radford. There's no need to worry about that tonight as they canter to a 3-0 win against last season's League champions. 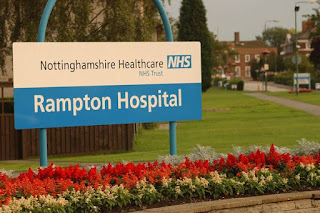 Sticky junior pops round on Wednesday evening to re-hang a few doors for me as he's a joiner for Barratt's by trade. He's on the works' Christmas party up at Doncaster Racecourse on Saturday afternoon followed by a scoopathon in Sheffield - Sunday will be written off  ... lol.

It's Friday morning 10:30am. I hear the squeak of the side gate, the good lady is back in town. I would love to say it was like a scene from the film Gone with the Wind, but nothing interferes with Ken Bruce's Pop Master. Prince Harry is in town with his new bride to be who I keep getting mixed up with the South African fast bowler Morne Morkel, because his bride to be has a similar name. Big H has a bigger entourage than Mariah Carey as he pops into the Nottingham Hood.

Ms Moon and I catch up in The Willowbrook, on Gedling Road, on her trip of a lifetime to a game reserve at Hanglip Mountain three hours from the capital, Johannesburg. On the safari she saw giraffes, elephants, leopards and lions. She's clearly in the mood  to see more animals, as on our return home she begins to plough her way through a back catalogue of ten episodes of Emmerdale Farm on catch-up. 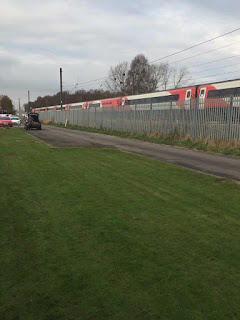 I don't sleep that well on Friday night, so I'm up early doors watching the Ashes. There's an extraordinary incident between Aussie skipper Steve Smith and a sullen-looking Jimmy Anderson. Smith looks set for a headloss at the non striker's end as Anderson stands immediately in front of him at short mid on, blocking his view. A steaming Smith doesn't last long with his stumps knocked over by the 23 year old debutant Craig Overton.

Heavens above, I best get a shift on it's a 2pm kick off. I'm flying solo today as Ms Moon recovers from her sojourn to Africa. She shoots off to the retail park to look for an outfit for the Keyworth Cricket Club Christmas bash at the Trent Bridge Long Room this evening.

Conor McNamara and the monotone Danny Murphy are commentating on Chelsea v Newcastle Utd at Stamford Bridge. Underrated Magpies' striker Dwight Gayle gives them a shock early lead.The car sat nav irritates me, it wants to send me to Newark and onto the A1. I stick on the A614, a decision I soon regret as it takes me through the village of Bothamsall and up a boatload of B roads. First port of call is the village of Rampton, famous for it's prison hospital which has housed some of Britain's vilest and notorious murderers including: Beverley Allitt, Ian Huntley, Bruce Lee and Charles Bronson. 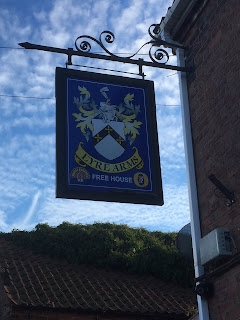 The village itself is quaint. I call in at the Eyre Arms a pleasant enough pub. I have a pint of Pale Ale from the Pheasantry Brewery just down the road in East Markham - it's amber nectar folks. Two guys are propping up the bar watching the Pies take on Oxford City in the FA Cup. Coincidentally one of them is a Keyworth lad who used to be head chef at The Griffin in Plumtree back in the day. I nod at him without saying hello.

I drive to Retford passing Rampton Hospital which is actually in the hamlet of Woodbeck. Retford is a market town with a population of 22,000. The cricketer Derek Randall was born in the town. I can't describe what an impact this guy had on my love for cricket. A brilliant, brave batsman, whose only weakness was nerves. He took on Lillee and Thomson and their barrage of bouncers on hard uncovered Aussie wickets, donning just a cap. He is the greatest fielder I've ever seen down the 'Bridge.' They nicknamed him 'Arkle' after the famous Irish racehorse. I remember bursting into tears when that blithering idiot Geoffrey Boycott ran out Derek in the Silver Jubilee Test in 1977. I was in awe when I met him a few years ago at a charity night. 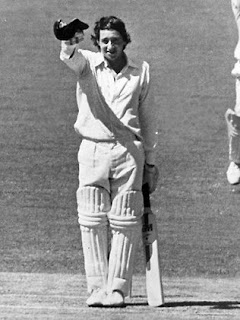 I stick the Mondeo in the ATS car park and wander up a tunnel towards 'The Rail.' A friendly chap is taking money at a green-painted hut. I pay in £3 and bag a programme at £1.50. I really like the ground. Retford Academy and a SEN school back onto it. It's roped off on the far side with refreshments available behind the goal to the right. I stand close to the dugouts with CMFL media team man Tony Squires, who is the chap in the know.

There's a minute's silence before the game in the memory of a friend of Retford FC. The home bench are visibly moved; it's a very touching, poignant moment.

A guy with a flat cap on and sporting a Prince Buster Ska T-shirt strolls up the touchline. Tony introduces me to Rob Waite the scribe from The66POW blog. How our paths have never crossed in the last ten years, Lord only knows. Rob's a master of story-telling, which is a good job really as all the game offers are a few crunching tackles. 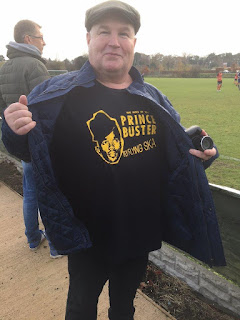 I check my phone, Notts County's on loan attacking midfielder Jorge Grant has scored another last ditch winner, his 14th goal of the season. Club owner, Alan Hardy will be noisy on social networks this evening. Good luck to them, I hope they go on a Cup run and make £3 million like 'The Lincoln' did last season.

I go big and buy two raffle tickets as there are three prizes on offer. Harworth take the lead with a quality cross and looping header over the outstretched hands of 'keeper Jon Kennedy. I peg it round the far side of the ground for a cup of tea as the PA guy shouts out the winning raffle numbers; I've not had a sniff today and neither has Red the dog who won't let me stroke him. 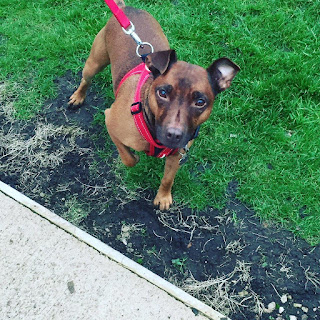 Retford are never going to score in a month of Sundays. Harworth make it 2-0 early in the second half. Retford huff and puff but never blow the house down.

Man of the Match: Derek Randall
Posted by Sticky at 7:08 PM