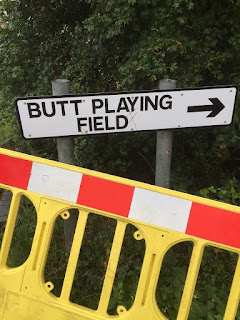 Postman Pat drops a letter on the door mat. It's from the Liverpool Victoria life insurance people. 'Hattie Jacques', the nurse, popped round the other week to take my bloods and check my well-being. I casually open the letter. I'm shocked to read that four of my blood counts are out of range - bloody hell, I was a Ginvalid in Nerja, Southern Spain for the previous 10 days. Panic sets in, as I make an appointment to see my doctor at Keyworth Medical Practice.

Two weeks later and I'm driving in the car, stressed out with work, the imminent house move and Lincoln City not having won again. My phone goes off. It's Dr Hamilton - no relation to the DJ and Fulham PA announcer 'Diddy David' or Formula One racing car driver Lewis - on the blower. My stomach begins to wrench. What if it's bad news? "Mr Palmer, your bloods are good, in fact they are excellent." Those buffoons at LV have put me through the mill. I thought I was in 'God's waiting room.' They can shove their life insurance right where the sun doesn't shine. 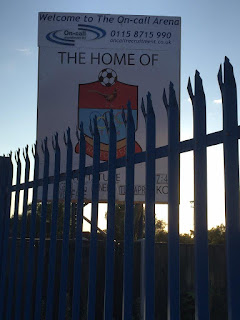 We get the green light for the house move; thank chuff for that. I manage to squeeze in a couple of games in between packing boxes. Radford's 'On-call Arena', on Selhurst Street, in inner city Nottingham, is my first port of call on Tuesday evening for an FA Cup replay. Boston Town, from Lincolnshire, are the visitors.

I stick the car in Asda, on Radford Road. It should be good for two hours before being clamped. I manage a brief chat with Radford's 'Director of Football', 'Big Glenn.' I'm a proper Jonah when it comes to watching the Pheasants. I think I've seen them win once in ten outings over the last few seasons. 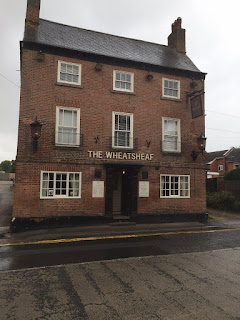 I hook up with Mr and Mrs John Harris who have served Priory Celtic FC, in Eastwood, so well over the years. The game ebbs and flows, but has an undercurrent throughout. It ends like a Greek tragedy for the big man as Radford lose out 4-3 on penalties. I love Radford and I'm gutted for all involved.  I daren't look Glenn in the eye as I exit the ground at 10:30 pm - the £1,500 prize-winning money is a lifeline for clubs like Radford. I peg it across the road to make sure those Bolts at Asda haven't put down the barriers and locked me in.

There's less to talk about on Wednesday evening as 'The Taxman' and I speed down the A46 to Lincoln United's wonderful, tree-lined Ashby Avenue. The game is a damp squib and ends up 0-0. I like both managers - Sam Wilkinson and Jimmy Dean. I'm particularly chuffed for Peterborough Sports gaffer, Jimmy Dean, as I know he'll be made up to come away with a point, thanks to his 'walking wounded.' 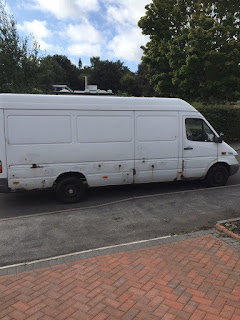 It's Saturday morning, 4am. I'm bolt upright in bed, playing on my phone. The good news on twitter is that Mastermind champion, Justin Moorhouse (from Phoenix Nights - couldn't scrub Tiger face paint off him) is playing Nottingham's Glee Club in October. I tweet my mate 'Dafty' at Dawn to let him know.

I cannot describe the feeling of excitement and joy at buying our first house together. There's only one part of the jigsaw missing. He comes hurtling around the corner in his 7.5 tonne van on two wheels, before performing a three-point turn on burning rubber in the cul-de-sac. White Van Man and his sidekick 'Rim' are done and dusted in just a few hours - they are different class. Contact me for a reference. 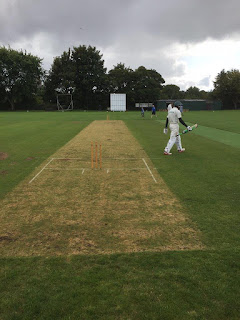 Some may say it's a little inconsiderate and selfish to still 'get a game in' on house move day. Ms Moon encourages this, as I've put a shift in over the last few months to hasten the move. My solicitor has been a joke. As Tony Hadley from Spandau Ballet once said: "Communication let me down."

I unpack a few boxes and hack down the garden. The TV guys from Currys are fitting a new TV to a stand, as I slip out the door and head out towards the town of Bingham. I'm familiar with the place as I had swimming lessons here as a kid at Toothill School, as well as a few scoops in the local inns and bars - not when I was 8 years old.  I remember once finishing a cricket game for the Millers at 9:45 pm following a rain delay. 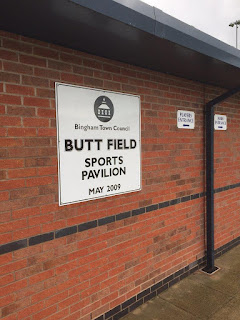 I park just off the main square, opposite the Butter Cross, a Wetherspoons 'professional drinking establishment we visited a few weeks ago on our journey back from Bedford Town. I wander across the cobbled streets towards The Wheatsheaf on Long Acre. I'm just enjoying a pint of American Pale Ale from the North Riding Brewery, up in Scarborough, when my mobile goes off. I fish it out of my pocket. A distressed Ms.Moon is reporting that the new TV has dropped down the bracket. 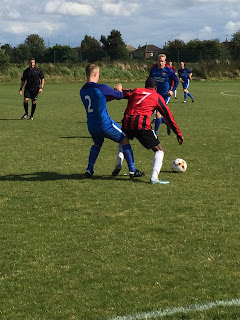 Those pair of muppet TV engineers are re-directed back to 'Ours' following a brief Sticky Palms head loss on the phone in the pub back garden. Rain is bouncing off the windscreen as I pull up the track leading to Butt Playing Field - is it me; or does it just doesn't sound right.

I bump into JK jnr who is a big cheese at Bingham Cricket Club - they've been rolled out for just 29 runs. The football match will be played on a temporary roped-off pitch on the far side of the complex. 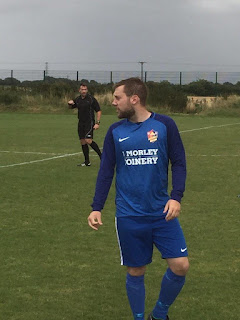 The ground is on the Bingham to Nottingham railway line - it's the main characteristic of the place. I coached a couple of Keyworth teams at a good level, but never came across Bingham Town. I always found it strange that better players in the area pitched up at the small village of Aslockton just down the A52.

Wollaton FC are today's visitors - they filmed the Batman movie The Dark Knight at Wollaton Hall, only a short distance from their ground. The Notts Senior League is still 'the best League in the World' - you are guaranteed goals and quality banter.

The visitor's manager is a gruff Scotsman. He resembles Bill Shankly, apart from the black-rimmed spectacles he's sporting. Those same glasses are offered to a linesman when a decision doesn't go 'Bill's' way. 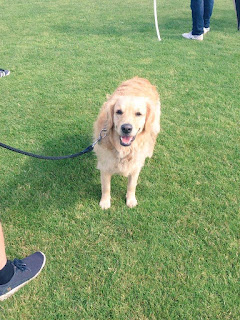 A wind-assisted Wollaton are the more creative side in the first 45 minutes, but fail to take their chances. Just before half-time Bingham striker, Tom Spencer, lifts a beautifully-executed free-kick over the wall and into the top corner of the net to give Bingham the lead. Non-League dog, 'Ruby', the Golden Retriever, wags her tail in delight

I scroll down the live scores at the break. The feel-good factor continues in our fantastic city - the Tricky Trees and Pies are 'one and two to the good' as retired local radio commentator Colin Slater used to say. The Pies' owner, 'Big Alan Hardy' will be beaming from ear to ear. What a shrewd appointment Kevin Nolan is turning out to be.

The second half is to die for - this League just never lets you down. Bingham's talisman, Tom Spencer, scores a pearler with his left foot. I remember the kid as a youngster, when he was in Leicester City's Academy - he's your thinking man's footballer. Bingham go 3-0 up and look home and dry.

The visitors have other ideas. They claw two goals back and take a grip on the game. Bingham survive a late onslaught to bag a deserved victory. As Bill Shankly once said: "Football's not a matter of life and death - and it's more important than a house move."

Men of the Match: White Van Man and Rim.
Posted by Sticky at 3:37 PM