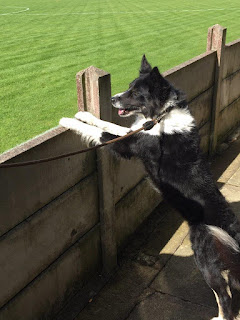 It was set to be an easy peasy, up sticks house move - they never are though. Three months down the line Jack diddly squat has happened - it has dimmed my view of conveyance solicitors. Mine has been particularly, curt, rude and incompetent.

It's Friday afternoon. I hear another email winging its way into my inbox. I nearly choke on my green tea - yes I'm on that stupid diet still. The email reads: "Contracts exchanged. Completion 18th August."  Hell's Bells. Heavens to Betsy. Holy Moly. I can't even celebrate with a tipple or two, as I only allow myself a scoop on Saturdays and Sundays. 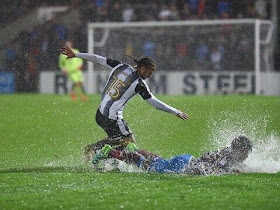 I've had a football bonanza this week. I was all set for Radford FC v Boston Town in an FA Cup replay.  A good hosing down in inner city Nottingham on Tuesday puts paid to that. I follow Notts County's exit out of the Carabao Cup at a soaking wet Scunthorpe United. The penalty shoot-out on twitter is agonising to scroll through - it's worse than Ceefax used to be.

Wednesday evening is spent in the idyllic surroundings of Quorn in Leicestershire. Retford Town from north Notts are the visitors. I'm accompanied by The Taxman and 'The Italian Stallion' - fresh from two weeks in the Canary Islands. Quorn have installed a 3G playing surface; which is a real shame, as their grass pitch was a belter. 'Rammers' strolls by. He's suited and booted in Kettering Town merchandise. The genial Geordie talks at 100 mph. A startled Taxman looks as if he needs an interpreter. Quorn run out 3-0 winners and pick up £1,500 prize money. 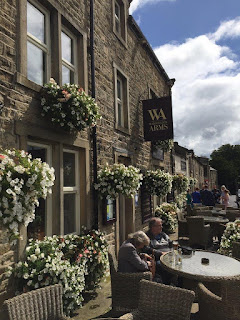 It's Friday evening and 'Floodlit Friday.' I'm at my old stomping ground on Keyworth United's Platt Lane, where I coached youth football for 10 years. Hilton Harriers have crossed the cattle grid into Notts. 'The Keyworth Georgie Best' (Sticky junior) is wandering around with a pint of maid's water (lager) in his hand. 'The Skipper' (my youngest) is also on the sidelines. Not a single drop of alcohol has passed his lips since returning from a 7-day bender last Monday in Kavos, in Corfu. I'm surprised he's not been on a drip in the Queens Medical Centre.

A 21-year-old lad catches my eye, wandering out of the bar. He is the best player I have ever coached. At eight years old he could have walked into any Academy in England. His left foot is as good as his right. He's out the traps like a greyhound. The end product is devastating and sublime. The boy hasn't kicked a ball since he was 18. There's more talent off the pitch than on it. Although a spirited Keyworth claw back a two goal deficit with a breathtaking final 20 minutes.

A load of Central Midlands League big wigs have rocked up - they walk about the joint like The Sopranos. The head of the 'Groundhopping Gestapo' is also in attendance. 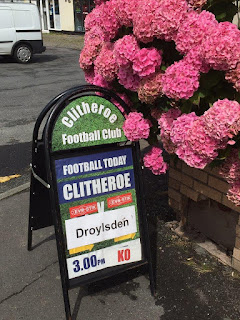 I remark to a couple of supporters, as we exit the ground, what an enjoyable game we have witnessed. A bitter Hilton Harriers supporter complains vociferously about playing against '12 men' - the referee was excellent by the way. I wish him a safe journey home back over the cattle grid.

Sticky is going solo today - Ms Moon is at the opticians and hairdressers. On the upside it means I don't have to listen to the cringe-worthy Absolute 80s and their box of six records including Go West, Alexander O'Neal and Whitney Houston - I've sang better in the bath ... whoops! 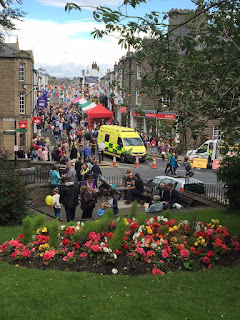 The Danny Baker phone-in on Five Live is hilarious. Former Everton attacking midfielder Leon Osman is on the 'Sausage Sandwich Game.' Being a proper northern lad Leon prefers brown sauce on his sarnie. 'Colin Murray Meets' is next up. He interviews the grounded Geordie Manchester United midfielder Michael Carrick, who tells an amusing anecdote about his Dad, a diehard Toon supporter and season ticket holder, having to support West Ham when they visited St James' Park, with his lad in the Iron starting XI.

I've lined up a pub just a few miles north of Clitheroe, in a picture postcard village called Waddington, up in the Pennines. The Waddington Arms is a little belter. It has stripped pine tables and cushioned bamboo chairs. The friendly staff rustle me up a Cajun chicken sandwich as I neck a pint of Lancaster Blonde. It's on the edge of the Forest of Bowland and has a two-level back terrace, with a neat and tidy tree-sheltered lawn. Ms Moon would love it here; I feel quite sad that she's not here to share it with me. I'll book us in for an overnight stay later in Autumn. 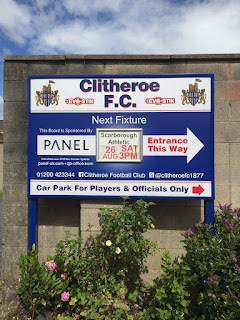 Clitheroe is in the Borough of Ribble Valley, 34 miles north of Manchester in the county of Lancashire, with a population of 15,000. It's most notable landmark is Clitheroe Castle, which is said to be the smallest Norman keep in England. Manufacturing companies in the town include: Hanson Cement, Johnson Matthey (formerly ICI) and Tarmac. The name Clitheroe is said to have come from Anglo Saxon for Rocky Hill.

Clitheroe FC were originally established in 1877 and play their games at the Shawbridge Stadium. They are managed by former Cardiff City, Wigan Athletic and Tranmere Rovers striker Simon Haworth. In 1996 Crystal Palace manager Dave Bassett paid Clitheroe £35,000 for goalkeeper Carlo Nash, who later played for Man City. Sunderland midfielder Duncan Whatmore had a loan spell at the club in 2012. BBC radio comedian Jimmy Clitheroe aka 'The Clitheroe Kid' was born in the town. 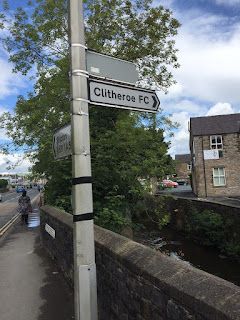 Bloody hell, the streets are gridlocked - it's the annual Food Festival, with folk visiting from far and wide. I stick the car on some posh housing estate, before strolling into town and up to the castle. It's a steep old climb. I gasp for air upon reaching the summit. The views across the Lancashire countryside, as the darkening clouds make way for blue skies, are stunning.

I make the descent back into town, fighting my way through the crowds at the 'Food Festival' before parting with £8 on the gate and £1.50 for an absolute cracker of a programme. I snap up a golden goal ticket from a friendly lady. The ground is a pearler and on a side slope. The pitch looks in mint condition to the naked eye. I love the white-washed and grey-stoned cottages that back onto the Shawbridge Lane ground. 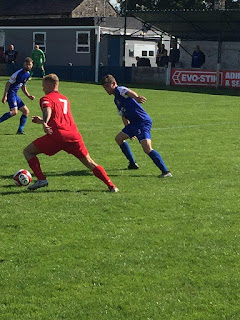 The DJ is on flames. We're treated to Bowie, The Buzzcocks, The Stranglers. Massive Attack and The Editors. In the North they always raise the bar. I get gassing to a Droylsden fan whose brother plays for the Bloods. He's a quiet, gentle, softly spoken guy with his finger on the pulse of the Manchester Non-League scene. He's proper excited and full-on when the ref blows his whistle to start the game.

I saw Droyslden play a beautiful game last season on two occasions. They won neither and were poor in the final third of the pitch.. A similar pattern emerges today; there's no end product and they don't shift the ball quick enough. Clitheroe take the lead on 23 minutes through big unit Sefton Gonzales, who has played for every club in Lancashire. I rip open my golden goal ticket in anticipation. I grimace at 89 minutes printed on the ticket.

I wander around the ground at half-time and bump into Gip the Collie whose front paws are resting on the wall, eyeing up the ball, as the substitutes toss it off instead of warming up. Gip's not chuffed when the Red Arrows fly across the ground. The Blues increase their lead in the second half, and despite coming under pressure in the final 20 minutes manage to hold firm for an opening season win.

Man of the Match: Clitheroe DJ
Sticky at 7:42 PM